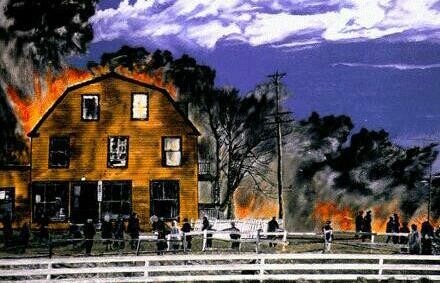 The Great Fire at Quigley's Corner

In 1942, a fire destroyed much of the waterfront of Eastern Passage, including Quigley's General Store.

The store was one of the landmarks of the community. Since insurance was almost unknown, the loss was a catastrophe in the village. In addition to the store, numerous fish houses and wharves were destroyed.

Dramatic accounts of the fire can be found in Joe Brown's book The View from Here. 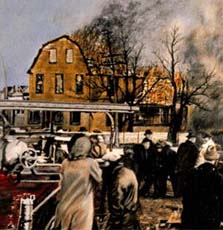 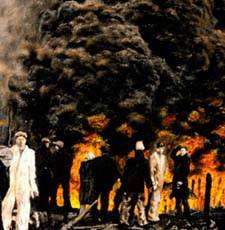 As far as can be determined, in the days preceding the fire, there had been an oil spill from a nearby refinery. The oil permeated the nearby creek, so that the waterfront literally erupted in flames.   The heavy oil smoke is depicted in the painting above.

The fire is still a definative event for the older residents of the Passage, as traumatic in its way as the great Halifax Explosion.