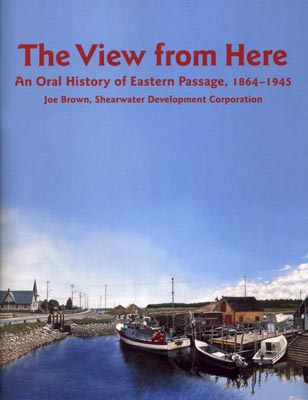 The View from Here
A History of Eastern Passage

This excellent compilation of the oral history of Eastern Passage was written by Joe Brown, Learning Centre Co-ordinator of the Shearwater Development Corporation, in 1997 and released to great local acclaim in the spring of 1998.

Dozens of the older residents of the Passage were interviewed for the book, including Clyde and his brothers Stan and Raymond Henneberry.

Anyone interested in the reality of Maritime small town life during the Second World War will find "The View from Here" a fascinating read. Most impressive is the extent to which Joe Brown was able to win the trust of the local historians with his genuine enthusiasm and objective voice.

Joe Brown deserves credit as one of the few writers since Helen Creighton to turn a literary eye to the fascinating history of one of Nova Scotia's most interesting communities.

The book can be ordered from:

This Homepage has no connection with The Shearwater
Development Corporation or Fisherman's Cove.