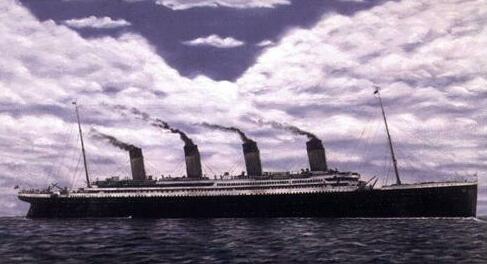 The sinking of the Titanic has special significance to Haligonians. Historic graveyards and artifacts from the sinking, long neglected as local curiosities, have become focal points of interest for tourists from around the world.

This painting of the Titanic, based on historic newspaper photographs, is one of Clyde Henneberry's many large oil paintings depicting the doomed liner.

Halifax was  to have been the host of the luxury liner when initial reports indicated that the Titanic would be putting in for repairs following its encounter with an iceberg in the North Atlantic. Instead, local ships had the grim task of going out to recover the hundreds of bodies littering the ocean in the wake of the collision.

Today, thousands of tourists from around the world visit local cemeteries to pay their respects to the Titanic victims buried there. 150 crew members and passengers were buried in Halifax between May and June, 1912.

The Maritime Museum of the Atlantic, on Halifax waterfront, contains a small but important collection of Titanic memorabilia retrieved by the ships sent to recover bodies in 1912.

The artifacts include a well preserved deck chair, a carved piece of oak paneling from the entrance to the first-class lounge and oak facing from one of the first-class staircases. Because of the immense interest generated by the recent motion picture, the museum's display has been expanded to include Titanic items found in other parts of Nova Scotia, as well as a model and a collection of unseen photographs.