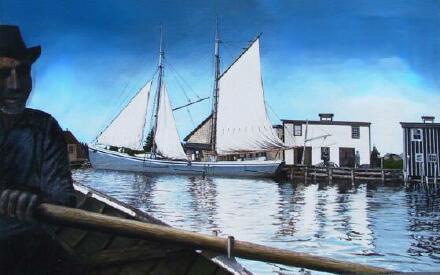 This recent painting depicts the schooner Maggie Holman in its heyday during the 1930's on the Eastern Shore of Nova Scotia.

The schooner was later bought by Maurice Henneberry, Clyde's father and converted for use dredging gravel in the Halifax harbour.

Describing his days working with his father prior to becoming a lobster fisherman, Clyde says he was "pack horse and mule".

At the same time, working dredging gravel was an adventure, compared to being cooped up indoors under the watchful eyes of the nuns at the school in Eastern Passage.