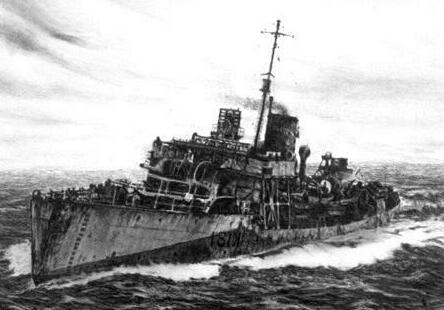 The HMCS Sackville, also known as "The Last Corvette" was one of more than 120 corvettes built in the Maritimes during the Second World War. Corvettes were responsible for the perilous task of escorting convoys in the North Atlantic, defending shipping from attacks by German U-Boats. The HMCS Sackville was built in the shipyards of Saint John, New Brunswick in 1941.

This rendering was one of Clyde's first attempt at a pencil sketch, completed in 1996. Unlike most artists, Clyde began working in oils and has only recently started to work with other traditional medium like pencil and charcoal.

Today, the HMCS Sackville serves as Canadas Naval Memorial, maintained by the Canadian Naval Memorial Trust (CNMT), a non-profit society made up of more than 1,100 Trustees from across Canada.

To learn more about the history of the Sackville, click here to visit the official homepage.   To visit the Fleetclub click here.

All images are Copyright 1996 - 2001  Clyde Henneberry
Copying or reproduction without permission is prohibited.