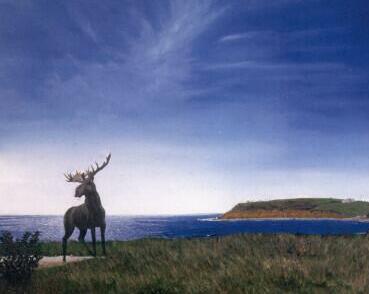 This painting depicts the "Cow Bay Moose"; a sculpture which stands on a local beach. Cow Bay and Eastern Passage are neighboring communities. At one time, the moose was part of a larger menagerie which is now buried under the sand.

The beach is a notorious "lover's lane", and the unfortunate moose has become somewhat dented from being used as target practice by local hunters over the years.

Legend has it that an appreciable percentage of the "baby boom" generation of Eastern Passage / Cow Bay / Cole Harbour were conceived beneath the knowing gaze of the Moose.

Local references to the Moose are usually accompanied by the admonition; "If that moose could talk, it could sure tell a story or two!"

In the summer of 2000, the beach was used as the set of "A Glimpse of Hell" - the television film depicting the 1989 explosion on the USS Iowa and subsequent cover-up (based on the best-selling book by Charles C. Thompson II.)